What makes something monumental?

Monumentality is often understood with the contexts of scale, visibility, intrepidness, and permanence. Still, it also concerns the meaning created by and through negotiated relationships between objects, individuals, and shared histories. All these meanings coalesce in the work of Richard Hunt (b. 1935), one of the foremost American sculptors of the past century. His reputation seemed sealed in 1971, at only thirty-five, when he became the first Black artist to have a significant solo retrospective exhibition at the Museum of Modern Art in New York. Indeed, much of the attention he has received from the art world ever since has remained focused on his early and more gallery-scaled work.

Still, Hunt has also established himself as one of the most important and prolific “monument makers” of the past fifty years. He has realized over 150 large-scale public and private commissions, realized in cities across the United States, including notable recent commissions for the National Museum of African American History and Culture in Washington (Swing Low, 2016), the Ida B. Wells National Monument (The Light of Truth, 2021) and the Obama Presidential Center (Bird Book, opening 2025), both in his hometown of Chicago. Richard Hunt: Monumental seeks to ground this work within Hunt’s broader artistic practice and more critically contextualize his tremendous contributions to the history of American sculpture over the past seventy-five years. 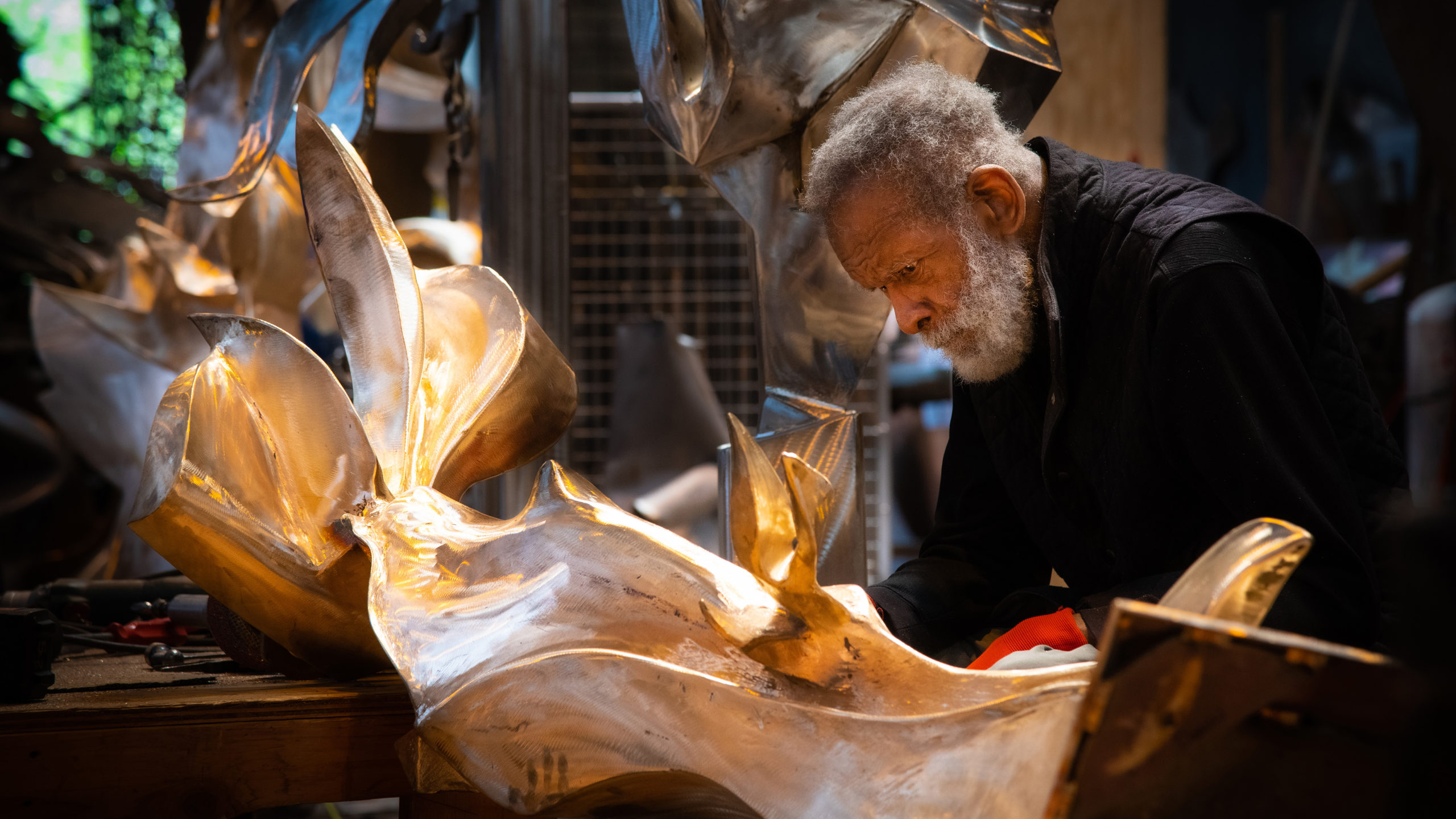 Image: Richard Hunt in his Chicago studio (2022), finishing a large-scale sculpture for The Riverfront Revitalization Project and the Gene Leahy Mall Park in downtown Omaha, Nebraska. Photo by Jim Grot

Richard Hunt: MONUMENTAL features approximately fifty metal sculptures inside 8,000 sqft of KANEKO gallery space that explore the idea of monumentality across Hunt’s long career. Including a few pieces dating from the 1960s will be included; the emphasis is on works created from the 1970s onward when he began to focus more on large-scale commissions and public projects. Most works included in the exhibition will be drawn from private collections and Hunt’s Studio and Estate collection. Many of these sculptures have not been exhibited in decades or have never been exhibited publicly.

Hunt’s monumentality is not based on platitudes or simply a preponderance of large sculptures but rather is deeply informed by and draws upon the specific, deeply researched subject matter and a broad range of influences that connect the histories of art, modern urban life, and the African American experience through a profoundly personal yet universally understood abstract artistic language. Richard Hunt: Monumental examines the artist’s status as a monument(tal) maker within the history of American Art as well as the expansive sources and ideas of monumentality that Hunt has drawn on throughout his career, which extend far beyond just his work created for public spaces.

Richard Hunt: Monumental is organized by Dr. Marin R. Sullivan, guest curator, and KANEKO. The exhibition is now on view at KANEKO  until February 5th, 2023. The timing coincides with the celebration of Hunt’s work in the city of Omaha, which began in July 2022, when one of his large-scale sculptures was installed downtown as part of The Riverfront Revitalization Project and the Gene Leahy Mall. Richard Hunt: Monumental will also be accompanied by a richly illustrated catalogue, edited by Sullivan and published by KANEKO, which will feature new perspectives on the monumental legacy of Richard Hunt and further explore the themes of the exhibition. Coinciding with the exhibition’s run at KANEKO will also be the publication of the first-ever major scholarly monograph on the artist (Richard Hunt, Gregory R. Miller & Co, 2022), which results in some additional programming opportunities. 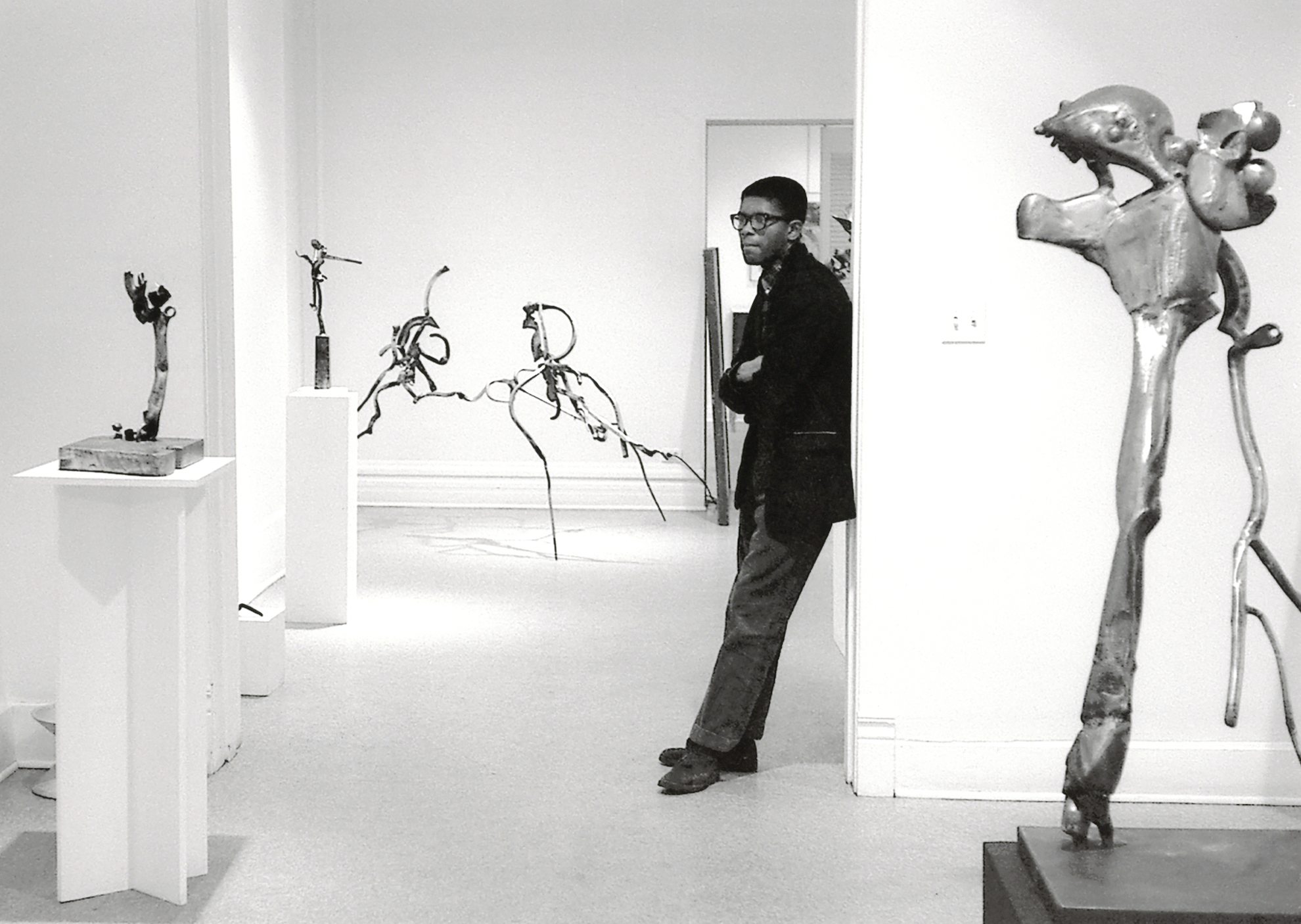 Born in Chicago in 1935, world-renowned sculptor Richard Hunt has singularly made the largest contribution to public art in the United States; over 150 public sculpture commissions grace prominent locations in 24 states and Washington, D.C. Hunt has held over 150 solo exhibitions and is represented in more than 100 public museums across the globe, from California to Maine, Detroit to Birmingham, and Vienna to Jerusalem. Read More